Activists as slaves against live exports of animals 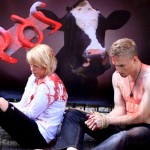 Animal rights activists (movement 269 Life) will met on Wednesday, 14 May 2014, 16 P.M. in front of the Australian embassy  in Prague to express their disagreement with inhuman and unnecessary “live exports”, strikingly similar to the now banned slaves transports. In the coming week such gatherings will be held in front of Australian embassies all around the world.

Quick look back at the human history shows us transports of slaves violently dragged from their homelands, families and loved ones. 70 years ago the whole world witnessed horrible transports of (not only) Jews to the concentration camps. Today, we think of this past as dark days of our history. The question remains – why do we still tolerate fundamentally identical live exports of animals from Australia to Southeast Asia and the Middle East? The only difference between these live exports and the now banned transports of slaves or Jews are the victims – then it was humans, now it is animals. However, years ago it had been proven multiple times, that animals feel fear and pain as any of us does.

The point of this event organized by 296 Life Movement is to show Australia and the outside world that treating animals as a property is unacceptable. The event will be accompanied by a short scene, in which activists will reenact auction of slaves: “We’d like to point at obvious similarities between banned transports of slaves and still ignored live exports,” the organizers say.

“During the voyage, animals are closed in confined, overcrowded space, they’re suffocating and they have to face extreme weather conditions. Because of these reasons and because of possible sickness many of them don’t survive the journey and only the slightest number of those is humanely euthanized. Also, when they land after weeks or even months long suffering, they are so exhausted they are not able to move. To get them “move” slaughtermen apply another form of physical torture – the animals are having their eyes poked with knives, their tails broken and chili peppers rubbed into their eyes. In the end, without their eyes and with their bones broken their throats are unprofessionally slit without prior stunning. The greatest paradox is that these live exports are preposterous – it has almost no effect on the Australian economics and it doesn’t even correspond with the consumer demand,” says website of organization focused at the live exports problematics.

We are meeting here today so we can together point out the injustice and abomination that are committed in the context of Australian live export to the Middle East and beyond. We would also like to bring to mind animal enslavement as such. Enslavement in which animals are not treated as living, sentient beings. Enslavement in which animals get a status of mere thing, that can be manufactured, stored and sold. Similar protests happened and will be happening all this week in other places of the world. Other activists from Australia, Greece, USA and Israel join this idea too.

Start of the end for the animals is their boarding. Boarding on huge ships that are often old and insufficient. Some vessels, such as the Al Kuwait, are old, converted oil tankers. Some decks on the Al Kuwait, are only around 1 metre high and the sheep in those decks are cramped together in near darkness. Other vessels are specially made for carrying livestock. However it has also caused some very poor animals welfare outcomes. It has happened before that animals on lower decks were observed to be in severe respiratory distress for several days continuously. Some of the animals were in such bad condition they were slumped on the deck or hunched over and drooling. Others were agitated and panting. The Department of Agriculture found that animals were subject to extreme heat stress, high humidity and high levels of ammonia which cause animals to suffer and die.

Other common causes of death on deck are stress, exhaustion and illness, such as salmonella, various types of inflammation or pneumonia. Due to an insufficient number of veterinarians on board most animals don’t get a chance on dignified passing and they die slowly with painful convulsions. 35,000 animals die every year aboard these ships. For example, when transporting 70,000 sheep at least 1400 sheep must die before the authorities are obliged to investigate the cause of their death. It is worth mentioning that the journeys take several weeks, in case of trouble which is not unusual it may take months. That is a sure death sentence for the weaker animals.

Animals who survive can await landing in hell. Australia exports animals to countries that have no laws to protect animals. They are left to human cruelty, sadism and greed. Provided they are not taken to a slaughterhouse right away, they are moved to a feedlot where they often encounter abuse or death from overheating.

Animals are sometimes bought privately by people who want to butcher them themselves as a part of religious feast. Tied sheep are either put on the car roof or simply pulled behind the car. Animals exported to professional slaughterhouses are transported to obsolete and poorly functioning facilities where staff cannot be counted among human beings. To make those frightened and exhausted animals move they break their tails and rub chili peppers into their eyes. At the moment when they are dragged to the place of their end they have their Achilles tendons cut, their legs broken or their eyes poked with a knife. All of this just to get the animals down on the floor. On cold floor where they will get their throats cut with a blunt knife, in many cases multiple times.

Australia is among the countries with the strictest laws on animal husbandry, that makes it even more striking that they could commit something like this. As a response to the many public protests Australia has introduced various measures to protect the exported animals (e.g. ESCAS – Exporter Supply Chain Assurance System). Unfortunately it is ineffective and in addition even supports barbaric practices, such as slaughter without stunning. Australian government advocates these export as an important part of its economy, but this is not entirely true. Live export accounts for only 0.3% of all exports. Its abolition would lead to the creation of new jobs across Australia. The vast majority of exported animals is bought by large companies based on the highest bid, that denies the allegation that Australia supports poor people in the export target countries.

Quick look back at the human history shows us transports of slaves violently dragged from their homelands, families and loved ones. 70 years ago the whole world witnessed horrible transports of (not only) Jews to the concentration camps. Today, we think of this past as dark days of our history.  The question remains – why do we still tolerate fundamentally identical live exports of animals from Australia to Southeast Asia and the Middle East? The only difference between these live exports and the now banned transports of slaves or Jews are the victims – then it was humans, now it is animals. However, years ago it had been proven multiple times, that animals feel fear and pain as any of us do. We encourage members of the Australian Government as representatives of the advanced and modern country to commit themselves to fight for the end of these barbaric practices that prioritize profit over pain and fear of others. We are all 269 and we will not rest until the animal rights will be taken seriously!

FEAR IS FEAR PAIN IS PAIN BLOOD IS BLOOD 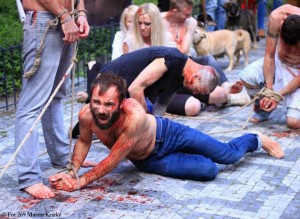 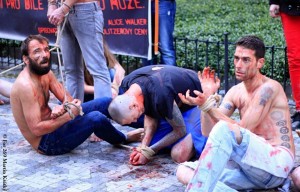 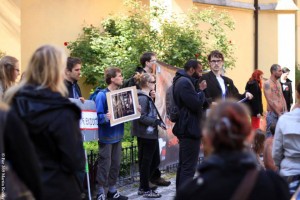