Radiation and radicalism in the Czech Republic

Since the catastrophe at Chernobyl in 1986, the Western nuclear industry has had many problems in continuing its work. Due to public opposition and financial problems no more new nuclear power plants (NPP) have been built in Western Europe (with France as a glowing exception) nor have new NPP’s been ordered in the United States. Thus the nuclear industry lost its market. Unsurprisingly they started to search for a new market, which they think they have found in eastern Europe.

Temelin NPP is a prime example of the western nuclear industry’s expansion into the East; situated 150 km from Prague, it is an unfinished VVER 1000/320, built and abandoned by the Soviets. Now CEZ ( the Czech electricity utility) and Westinghouse (an American multinational) are completing this unneeded NPP. The American government (through its Export-Import Bank, and thus using tax-payers’ money) has just decided to grant Westinghouse a loan guarantee, despite high levels of public opposition.

The mix of western and eastern technology in use at Temelin is new and not tested for safety. Besides that the capacity to be created by the new NPP is unneeded. CEZ has run a campaign in the last few years to promote electrical heating. By severely subsidising the electricity prices and selling and installing the heaters nearly for free, they have created an electricity demand even higher than the proposed capacity for Temelin. In the meantime the government has no money left over to make the existing brown coal plants more ecologically sound (i.e. through filter systems), because of costs-overrun at Temelin. Thus the brown coal plants continue to heavily pollute large areas of the Czech Republic and even Germany, affecting peoples’ health, life expectation and even birth rates.

A Brief History of the Anti-Temelin Movement

Public opposition to Temelin has quite a long history. Since the beginning of the 1980s, when the construction of Temelin first began, there have been several waves of opposition. The first protests were organised by locals who were the first people to be dramatically affected by the construction: three villages were completely wiped out and villagers resettled. Some people left immediately, others were forced out later, a few remained. Out of the 60 original inhabitants in one of the villages, only 7 still live there. The Pizinger family exemplify this struggle today. They were bought out by CEZ 13 years ago, and given low prices by the state for their property. Now that their house is destined for demolition this spring, they will be forced from their home with only a fraction of the house’s value and will have lost their only trade – farming (they have been “relocated” to an urban setting which doesn’t allow farm animals).

Reacting to these injustices, villagers attempted to publicly protest. Unfortunately, the oppressive Communist regime of the ’80s didn’t allow organised movements and in effect banned their protests. They responded by continuing to demonstrate their disapproval individually. Their most common response was to send letters of protest which gained little sympathy or consideration from the government. The only reaction on the side of the establishment was an official explanation describing how the plant would play an important role in helping the future construction of socialism. Soon, this local opposition was completely silenced. There was little resistance in the years that followed because villagers felt it was nearly impossible to influence the government’s centralized decision making structure.

Fortunately, a big opportunity for campaigners opened up after the political changes in 1989. Supported by Austrians, the region experienced its first public and mass protests. Huge gatherings took place at the Temelin construction site. As a result, a tradition of opposition was created. The biggest protest occurred in 1991 – a festival at the main gate of the plant which was attended by nearly ten thousand Czechs and Austrians! This newborn movement achieved some notable victories – in 1990, the regional government voted not to prolong the construction license for the 3rd and 4th reactors. This decision meant that the plant would now be half its original size. But despite this triumph, chances for initiating a complete shut down of the project were vanishing quickly.

Although the numbers involved in the movement were rising, their influence was decreasing due to time pressures. The oppostion experienced its peak in 1990. During this time, putting the new democracy to the test with public protests was a popular activity. As a consequence, many people actively participated in the campaign against Temelin which, combined with temporary hesitation on the part of the state institutions, greatly influenced decision makers. However, numbers began decreasing monthly as people lost interest in participating in large scale demonstrations. As a consequence, decision makers became more self-assured and less fearful of public pressure. CEZ, the Czech electricity utility, ignoring the desires of the people, continued the construction of the plant, pretending its completion was never in question.

It was not long before this second wave of opposition began to withdraw and diminish, discouraged by politicians who still made decisions regardless of public opinion. With no culture of opposition, most people preferred to go back to their private lives rather than continue resisting a government which didn’t seem to be listening.

In the middle of 1992, the government made their final decision on Temelin’s future. These decisions again challenged opponents of the plant and in response a third wave of opposition was created. This time, its core was formed by a wide coalition of several dozens of environmental organizations. Their aim was simple: to convince the government to reject Temelin. They organised actions, petitions, public debates, open letters and other media events. The newly elected (1992) government, led by recent Prime Minister Klaus, was not interested in public opinion at all. Most requests for debates were simply ignored, petitions were not even formally answered, and open letters were thrown into the dustbins.

By autumn 1992, despite clear opposition and obvious alternative resources, all ministers had agreed that Temelin was necessary and the best solution. Studies had proven that Temelin was not the least-cost solution to the Czech Republic’s energy needs, as claimed by the nuclear establishment and ministers of government. Even though these results were published in papers and shown on TV, the ministers were already decided. In a formal decision in March 1993, all 18 voted in favor of Temelin.

The announcement of this decision had a killing effect on the anti-nuclear movement – almost all the groups cooperating in the coalition gave up, thinking that further efforts would be a waste of time and resources. Consequently, they began focusing on other winnable issues. After another battle lost, only a few decided to continue the war against Temelin.

Those few still bravely opposing the plant realized that it depended upon the involvement of the Western players, such as the US Export-Import (Ex-Im) Bank and Westinghouse. Both of the project’s needs – technical and financial – were being met by the United States: Westinghouse would supply the technological upgrades and the Ex-Im Bank the loan guarantees. Therefore, a holistic strategy was adopted – using internationals to pressure the Western institutions, and a strong local civic movement using direct actions to target the Ministers at home.

One of the campaign highlights was the move to stop the Ex-Im financing for Temelin in 1994. Extensive lobbying at the U.S. Congress, whose members had the power to reject Ex-Im’s decision, took place. In February and March 1994, with the help of several U.S. organisations, representatives of both Austrian and Czech movements opposed to Temelin travelled to the U.S. After many exhausting weeks in Washington, and despite the support of fifty Congressional representatives, the Ex-Im headquarters confirmed their decision to provide money for Temelin.

Today, there is a stronger focus on supporting the civic/direct action movement. The direct action movement, which still grows today, represents historically the fourth wave of opposition to Temelin. Our first blockade of the Temelin site took place in May 1993, with about 50 participants blocking one of the gates for a few hours. All were arrested. Nevertheless, it brought wide media attention to the problem of Temelin.

Then, that same summer, a protest camp was organized for the month of July. Both actions – blockades and camps – became the corner stones of the movement. Now, every year, a blockade and protest camp is organized. As the number of participants at the blockades grows (1993-50, 1994-150, 1995-250, 1996-500), and the length of the blockades increases (in 1996, it lasted 72 hours and covered all 11 entrances of the site!) these actions become more and more effective, making the life of nuclear proponents difficult. Furthermore, the yearly protests attract a considerable amount of public attention to the problem.

The blockades have also been supported by many well-known personalities: several singers, writers, and politicians (including Petr Pithart, former Prime Minister and recent Chair of Senate, and Petra Buzkov, the Vice-Chair of the House of Representatives). We believe that the resistance will continue to grow. In fact, we are expecting at least 500 people at the blockade this July 1997. Everyone who wants to help and is willing to respect the non-violence guidelines, is welcome. 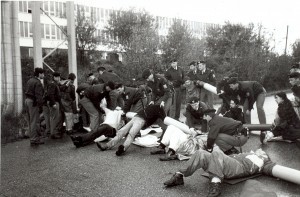