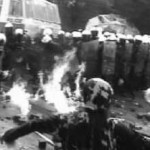 An article from Do or Die Issue 9. In the paper edition, this article appears on page(s) 10.

Arriving at the meeting point for the various different routes, we wandered around for a while trying to find the blue route/black block people. We eventually found the dodgy looking men and women in black lurking around a patch of trees that provided a bit of cover from the constant helicopter surveillance.

As the different coloured routes formed up and prepared to move off, some people started to dig up the cobblestones and pass them around. Others had discovered that the Socialist Workers’ Party placards were attached to good solid sticks instead of the usual flimsy crap and started to strip the paper off them so they could be used to fight the cops.

The black block was made up of several hundred anarchists and autonomists from a huge range of countries – Czech, German, Spanish, Italian, Greek, Polish, American, British and probably many more. After waiting for what seemed like a very long time to move off we shuffled away from the square and made slow progress towards the Conference Centre. The march stopped and started, whilst we listened to slogans and songs in assorted languages, most of which sound just as dull as the English ones, although top marks to the American Infernal Noise Brigade drummers and to the Spanish CNT for singing proper songs with tunes and everything.

Eventually we reached the approach road to the Conference Centre. This street proceeded uphill along a small valley, with apartment buildings on one side, a park edged by cliffs on the other and rows of riot cops backed with armoured personnel carriers and water cannons at the end.

There was no doubt about what was going to happen next, none of the gradual build up of hostilities with the cops that usually happens in Britain. People just attacked them with everything they had as soon as they were in range. First came the cobblestones, then the first of the Molotov cocktails sailed over and exploded to a cheer from the crowd. After that the attack was relentless – most of the pavement and sections of wall were dug up for ammo as the fighting spread into the park. The cops responded with volleys of concussion grenades at first, then started using tear gas when that had failed to disperse the crowd. None of their initial tactics worked very well – the concussion grenades were easy to get used to after the first few had gone off, the tear gas seemed quite weak (lots of people without gas masks were able to stand around in it) and even the water cannons seemed underpowered (they just made you wet without knocking you over).

The cops were forced back a little way, then brought the armoured vehicles to the front and made their line behind them. After this there was just no way to make further progress. The small entrance we were trying to take had cliffs on both sides and tanks in the middle – there was no way to get through, but they couldn’t come out to disperse us either. This stalemate continued for an hour or so, with stones, bins and the occasional Molotov flying over to batter the police lines or bounce harmlessly off the armoured vehicles in front. Despite being probably the most full on thing I’ve been on, it also felt quite safe knowing that you could rely on everyone around you to pile in and try to de-arrest you if you got nabbed. Also, because of the constant attack the cops didn’t even try to snatch people – I don’t think anyone at all was arrested on this route.

Eventually the cops built up enough reinforcements to try and come out again. As they advanced, more of them and another water cannon joined from a side street and the crowd was slowly pushed back down the hill, fighting all the way. Reaching a junction a barricade was thrown together and burnt to slow down the police advance and allow people to regroup (this was typical of the way groups constantly saw what needed to be done and just did it, without lengthy discussions). Seeing that the cops finally had the advantage in this area people began to disperse in smaller groups, some trying to rejoin the attack at another point and others retiring to the pub. Many others headed for the city centre where the fighting continued through the night.