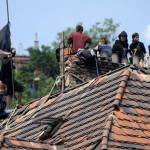 The Prague’s renowned squat Vila Milada, which was evicted three years ago after being one of the most important places for Czech autonomous underground scene, had been occupied by approximately 30 people on Saturday July 30th to commemorate the bleak anniversary by an improvised hardcore punk gig. Even though the authorities were informed that this is a one-off event which is not an attempt to reocuppy the squat for good but a symbolic pointing out of a passive approach of a Czech state to take care of unused buildings and of the oppression against alternative culture, the police reacted with a massive police operation including an aggressive attack against the non-violent concert-goers, which resulted in many bloody injuries and in a temporary arrest of tens of people. At least 20 people were brutally beaten up and psychologically humiliated inside the building out of reach of cameras and witnesses and the remaining 7 activists hid behind the chimneys on the roof of the building, fearing for their health and risking their lives over a 4-storey gap directing to ground. After a day-long negotiations and a couple of stupid attempts of the Czech police to harass tens of supporters in front of the building, the squatters decided to climb down if the Police lets them to gather their belongings from the lower parts of the house. In the early evening of Sunday July 1st, they realized all of their equipment, including laptops, loudspeakers, guitar combos and electric guitars, were smashed up by the intervening Police riot squad. The owner of the house is going to bring a lawsuit against the activists and more serious offenses are actually threatening them.

This entry was posted in Novinky and tagged Czech Republic, squatting. Bookmark the permalink.