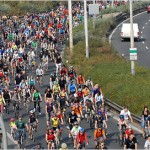 Although there is something of an unofficial ‘formula’ for rides, it seems that in reality Critical Mass models tend to vary around the world.

Instead of meeting on the last Friday of the month, for instance, the Budapest contingent meets only twice a year. However, by concentrating their energies into just two rides, the cyclists of Hungary commit wholeheartedly to making these rides count: although the table below is a bit out of date, the statistics from 2013′s ride indicate that they had more than 80,000 riders at their Spring event – by the time the last cyclist had crossed the ‘start’ line, the rider at the front of the pack was already 13km away! 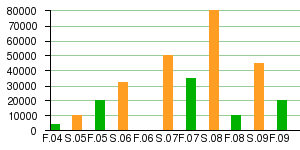 Staggering statistics from Budapest (N.B. unrelated protests ruled out the possibility of a ride in Fall ’06)

The Prague ride has also become hugely popular over the last decade, primarily though appealing to families, but also by coordinating with the police.

While the Czech’s conform to the tradition model of meeting once a month, they choose to ride every third Thursday (instead of on the last Friday). Although the rationale behind this decision is unclear, whatever it is it seems to be working to their advantage… 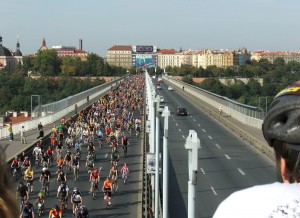 Another thing that sets Prague’s Critical Mass apart from the traditional model is the clear set of ‘rules’ that it outlines on its homepage. Although Critical Mass riders are generally expected to stick to an unwritten ‘code of conduct’ (or ‘etiquette’) during the rides, the people of Prague have been more explicit about what they expect of participants. The rules are fairly commonsensical, but it seems like a good idea to keep everyone on the same page by writing them down and acknowledging them openly.

As they stand, here are the rules of Prague’s Critical Mass:

– We don’t want to be aggressive. We are not here against cars, but instead, on behalf of bicycles and a more pleasant city. We don’t want to shout at car drivers and will treat them with respect at all times!

– We are considerate. The front of the pack stops at traffic lights and yields to pedestrians and public transport vehicles. Similarly, we don’t restrain cars or other transport more than what is necessary.

– Nobody may overtake the front of the pack, neither should anybody lag behind its tail.

– When riding inside the pack, you don’t have to take care of anything, just try to stay together, so that the pack doesn’t split up.

– Due to the participants’ safety (after an agreement with the police), we break certain traffic regulations. It would be neither safe, nor practical if the pack kept splitting up because of stops at traffic lights or when yielding to pedestrians and cars, thus letting them enter the inside of the pack.

– We don’t ride on pavements/sidewalks or on streetcar [tram] tracks.

– Don’t forget to bring your bicycle lights and other required accessories with you. Children must ride with helmets on.

– Please, make sure you and the people around you comply with the above rules.

While I believe that the imposition of anything so concrete as a set of ‘rules’ goes slightly against the autonomous spirit of Critical Mass, I cannot deny that there is a lot to be gained by having a safe, sensible, and self-aware group of riders.

A little closer to home, the recently re-branded Leicester Critical Mass describes itself as “a two-wheeled charm offensive.” With a different theme and dress code every month, it appeals to riders (partly, at least) because of its celebratory atmosphere.

At this point, it is worth noting that the models employed by the most popular and successful Critical Mass rides today (such as those in Leicester, Budapest, and Prague) explicitly rule out confrontation. These cities have tailored their rides to work in their respective locations and by doing so they have grown to embody the true spirit of what it means to achieve a ‘Critical Mass’. When you have a peloton of 100+ riders then you cannot be ignored by other road users or relegated to the gutter – this is not only when you are safest and most visible, but also when you have the most fun!

Critical Mass can offer something rather democratic, and in a way, more precious than any traditional form of protest. Without leaders or organisers, and unlike the atomised aggression created by a transport system of individual metal boxes, cycling in a group, in a shared space, makes people open and collaborative. As one rider said to me last month: “Cycling changes people’s attitudes. It turns individuals into a community.”

We are beginning to build this community in Edinburgh, but as we grow I think that it is worth considering how we ought to tailor our rides to suit our city. One-size-fits-all does not necessarily apply to Critical Mass, and if we are to continue to gain momentum and attract new riders then perhaps we need to get creative. Please share your ideas in the comments below, or bring them to the rides and meetings – all opinions and suggestions are welcome.