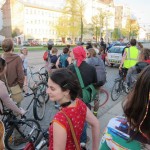 My hometown Olomouc is a students´ city in Moravia, in the east of the Czech Republic. The city has about hundred thousand residents and is located in the floodplain of the Morava River. The flat ground makes the city ideal terrain for cycling, but a major obstacle for cyclists is insufficient supporting cycle infrastructure. Often a segregated cycle path will suddenly terminate at a bus stop or a pavement. With discontinuous cycle lanes and absent interconnections riding through the city center is a frustrating experience. Some town „squares“ are actually road junctions or parking spaces in practice so they need renaming. Uhelná Street is renamed to Uhelné car park in the picture below. 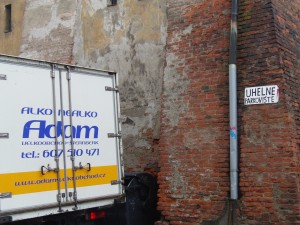 A local senior cycling advocacy group called Olomoučtí kolaři demanded improvements to the cycling infrastructure from the city council. Their voices had not been heard for many years. In early 2011 an open group of young cyclists inspired by Critical Mass decided to make demands for the infrastructure louder and they initiated grassroots bike rides. I dare to say that it was the first case of regular bike rides organized non-hierarchically in the Czech Republic. Bike rides in other Czech cities (Prague, Brno, Ostrava, Pilsen) and generally in the Eastern Europe are commonly called “Critical Mass“, but they are organized in a different way than in most English-speaking countries. Czech bike rides are for the most part organized by environmental or cycling NGOs; routes of bike rides are well planned in collaboration with police and often politicians and even corporations participate on events. Hence these actions can attract much more people. For example „Prague Critical Mass“ organized by group called Auto*mat attracts about 5 000 cyclists two-time per year (April and September) and dozens of participants in others months. In Olomouc we decided to develop more anarchist and spontaneous style rides without formal organizers. 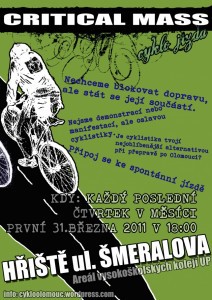 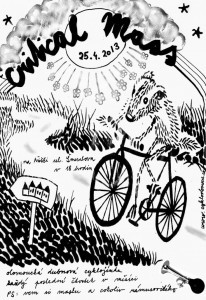 The first Critical Mass bike ride hit the streets of the city on the last Thursday of March 2011. Have a look at this video showing more than twenty cyclists celebrating non-motorized traffic.

This one was the first of many. Since then Olomouc Critical Mass bike rides took place on the last Thursday of each month. The meeting point was in front of the dormitory on the playground in Šmeralova Street, and cyclists used to assemble at 6:00 pm and start at 6:15 pm. Usually 15 – 50 cyclists participated in a bike ride, but sometimes especially during summer holidays there were only about three cyclists at the meeting point. In this case they often abandoned the ride and decided on an alternative plan. Similarly from December to February Critical Masses did not happened because of unfriendly weather during winter months.

In May 2012 a local group of Amnesty International joined in with the Critical Mass bike ride in a symbolic protest against oil extraction in Nigeria by Shell. One of three Shell petrol stations in the city was closed for a short time (photo below).

In April 2013 about 50 cyclists who were in a good mood were stopped by police officers at one of high streets in the city (photo below). They asked for organizers, but after a while confused officers left the scene and Critical Mass went ahead. 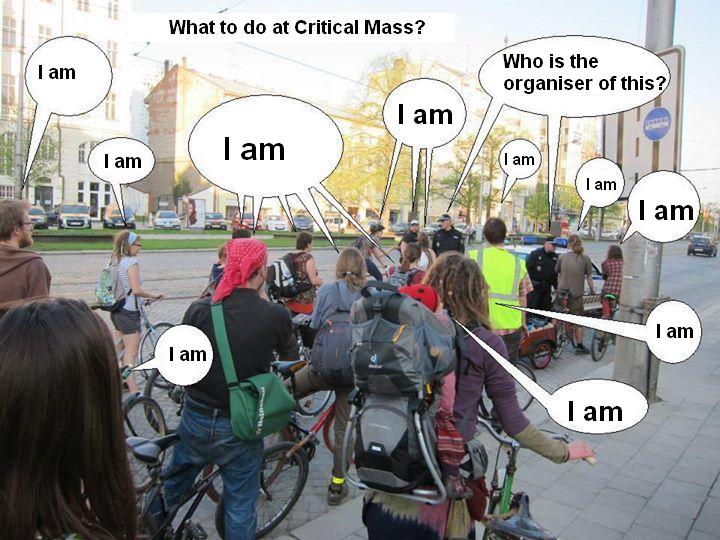 After one year of Critical Masses, a different style of cycling action appeared. Unknown pushers modified five billboards advertising cars into pro-cycling and anti-car messages. Adbusters spread a witty on-line manifesto stating that the action was done in protest over occupation of streets and squares by four-wheeled vehicles. Thanks to social media the manifesto was read by many thousands. One of the billboards (photo below) stated: Death is cool – 2 549 dead on roads during two years. 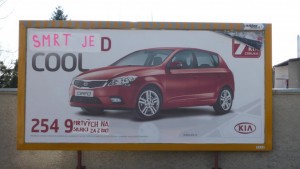 Over the course of time it became obvious that Olomouc Critical Mass bike rides were attracting just a dozen or so cyclists and it was mostly an enjoyable event for a bunch of friends. It can be seen as a success for just that, but it most likely didn´t make enough pressure on the city council. Also the few altered billboards might not change a lot on the streets. This may explain why more powerful and empowering actions have developed. Why should we wait for building new facilities by authorities if we can do it by yourself? This question could have been asked by those who made concrete ramps up to high kerbs for cyclist at different places across the city in summer 2012. Besides spreading a proclamation of full of criticism about city council inactivity, anonymous activists had started to do something more tangible for cycling. 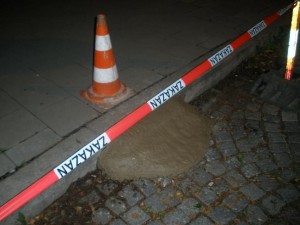 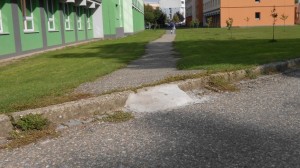 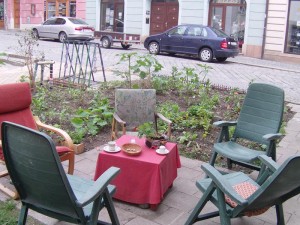 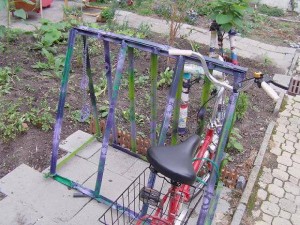 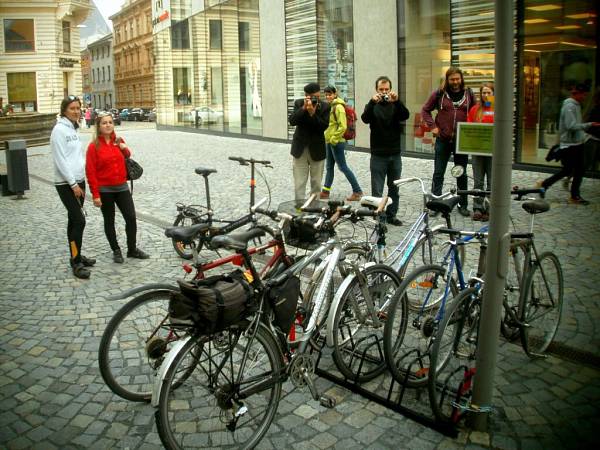 A lovely instance of direct action was carried out by cycling guerrillas who painted 30 meters of missing cycle lane in a park. They interconnected a current cycle path and a street road. The anonymous painters used an original paint specific for horizontal road signs and as far as I know the cycle lane has still not been overlaid by community services, hence it is still in operation for more than half a year. Before the cycle lane was painted police officers had penalized cyclists at that stretch, but now that does not happen anymore. Now cyclists pass through without fear of getting fines in July 2013 (photo below). Again the creators spread an on-line communique which criticized authorities about cycling infrastructure development in the city. 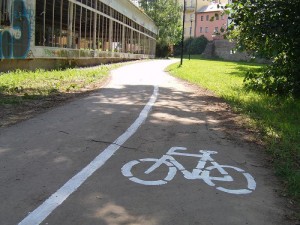 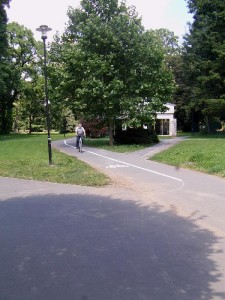 Unfortunately Olomouc Critical Masses stopped in summer 2013 and since this time bike rides have not been happening because the person that was the most active burned out. But that is the risk of informal hierarchy. In any case whether there are rides or not there is still a community of people around Olomouc Critical Mass who still meet with each other for open community vegan diners, dumpster diving, guerrilla gardening, food not bombs events, and other activities. Seeds are sowed and there are many who can hold the baton. Hopefully Olomouc Critical Mass will be resurrected in a spring.

Yours fellow masser from Czech