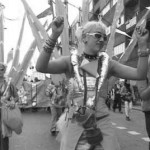 An article from Do or Die Issue 9. In the paper edition, this article appears on page(s) 9.

Most UK activists arrived in Prague in the last few days leading up to S26. Several people had brought huge drums into the country with the intention of providing a mobile up-for-it samba band for the big day, and another group calling themselves ‘Tactical Frivolity’ had brought materials to make pink and silver dancing costumes. Others smuggled in radios, phones, flags, gas masks and other tools of the trade. We turned out to be one of the most well equipped groups.

After several discussions it was decided that we didn’t want to go with the INPEG plan and slot into the three designated routes to the Conference Centre (Blue – dangerously enclosed with no escape route; Yellow – already taken care of by Ya Basta!; Red – full of Trots), but wanted to form our own route… the Pink and Silver route. We spent the remaining few hours practising samba breaks and desperately trying hard to set up an intricate, non-hierarchical, consultative communications structure, involving cycle-scouts, signal flags, affinity group reps and spokescouncils.

On the morning of S26, we met up in a park not far from the square and then processed in formation (banner and black bloc in front, dancers and samba band behind with affinity groups and medics surrounding them) to the square, expecting not to be able to get in if the expected 20,000 people had turned up. However the square only had about 8,000 people in it, but still looked amazing. The pink and silver band and dancers did look and sound great, but the samba was drowned out by the Ya Basta! soundsystem, and we didn’t attract the numbers we hoped for, leaving us with only about 400 UK activists and a smattering of other nationalities.

We left with no police escort and made our way to the south of the Conference Centre, winding down tiny Prague streets, managing to get amazingly close to our target. However, when we reached a major road leading to the Conference Centre, we could see an impressive array of riot cops, water cannons and police vehicles. We had a bit of a stand-off where we sat down and ate our sandwiches at them and then with tip-offs from our invaluable cycle scouts we got moving and nipped down some side streets (surrounding and trashing some delegates’ cars on the way). We couldn’t believe our luck when the next police line we came across was a thin line of shirt-sleeved non-riot cops, with a few barriers in front of them. We moved quickly to get through them before they brought in the riot cops. They proved incredibly up for it though, and responded to our push with batons flying.

Sticks ripped from SWP placards proved useful for defending ourselves but it was not good enough. There weren’t enough up-for-it people at the front to get through the police line, and as they fired a load of noise bombs at us, everyone panicked and ran for it. The next 30 minutes were spent ripping up cobblestones and throwing them at the cops. Some people attempted to barricade against police lines and this drew out the riot cops, who charged, scattering the crowd. A water cannon was used but it looked a bit impotent as the pressure wasn’t up, and it was withdrawn quickly before we could damage it.

In the end we moved around a bit as we were unsure of where the delegates were coming out from, and we ended up at a huge posh hotel right next-door to the Conference Centre. Incredibly we managed to climb on to some of the balconies and some of the windows got smashed before everyone left, worried about the lack of an escape route. Up above, delegates watched, allegedly (so insiders tell us) shitting themselves. Down below people were trashing and bouncing cars into the road in front of riot cops and the dancers danced up to the cop lines. The riot cops’ charges succeeded in splitting the crowd, but there was a great moment when one person was de-arrested after being snatched by undercover cops.

Later everyone left to go into town for the opera which the delegates were attending….