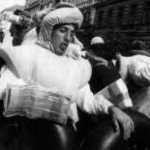 An article from Do or Die Issue 9. In the paper edition, this article appears on page(s) 11.

On the 26th, the yellow march was led by an Italian group called Ya Basta!, who have made quite a name for themselves by dressing up in white overalls with lots of padding and protective armour and taking on lines of riot cops in this bizarre ‘Michelin Man’ get-up.

About five hundred Ya Basta! people were in front, followed by another two thousand or so activists from various different groups such as the PKK, Basque separatists, Spanish anarchists, unionists and international socialists.

Ya Basta! might have looked impressive in their white overalls and pads, but not so much to the people who were told off and attacked because they were carrying sticks and were prepared to fight the police on their own terms and not those of the Ya Basta! bureaucracy. Moreover, on the way to Namesti Miru they constantly told off people for not walking in line, and then attacked others who decided to smash a McDonalds with the excuse that it was spoiling their media image. It was becoming clear that Ya Basta! is a hierarchical organisation with visible ‘leaders’ and spokespeople.

Ya Basta! originates from the social centres of Italy. They were first formed during the collapse of the Eastern bloc when a large section of the Italian autonomia movement started reconsidering their ideas on class struggle and communism etc. Although the crude Marxist-Leninist approach to class and capital has been abandoned, it seems certain organisational characteristics still remain.

A Bridge Too Far

The march was flowing forward to the tune of whistles, drums and shakers when it all stopped because Ya Basta! had decided to hold an impromptu press conference in front of the police blockade on the bridge. Frustration was creeping into the activists who were prevented from getting to the front by the ‘Ya Basta(rds)!’ crowd control. You could hear the police ordering the crowd to disperse, smell the tear gas, see the smoke and even feel the droplets from the water cannon without being able to confront the police and bring about a meaningful outcome to a mass gathering of people who had travelled here to shut down the IMF. And all because some people had decided for you that this was to be a non-violent protest.

Eventually when I got to the block of Ya Basta! activists they were spectacularly dressed in gas masks, helmets and white water proof macs stuffed with bedding to provide padding. The action at this stage waxed and waned with scuffles breaking out between single activists and police. Brief charges at the police with their own barriers were the most effective tactic ‘allowed’ but it was never going to move the police tanks. During the actual confrontations with the police, non-Ya Basta! people were not allowed to come near the fight or to throw rocks from the back. The police finally did retreat all of five metres but did not seem particularly interested in arresting anyone. For more than 2 hours the ‘White Overalls’ were pushing up against police lines, but the bridge was thoroughly blocked by the armoured police vehicles and it proved to be too difficult to break through to the Conference Centre. They eventually left the bridge and joined up with the other marches on the way to the Opera House.

So it really did seem like a waste of resources (two or three thousand people) by Ya Basta! to try to ‘boss’ the march into a contradictory attempt to get across the bridge that they were never going to win. In the end the march was neither peaceful nor violent but rather a liberal ‘Non Violent’..