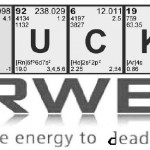 Olomouc as an university town hosts each year an International Festival of Science Documentary Films, called Academia Film Olomouc (AFO). This year, it was the 48th AFO’s anniversary and one of the festival topics was Politics, truth and global warming. Despite it, AFO was visited by greenwash guerilla group, which intention was to highlight practices of AFO’s general sponsor – the energy company RWE.

In Czech Republic the RWE is building up environmentaly friendly reputation by hiding its climate crimes and sponsoring film festivals like AFO. One of the crimes is open cast coal mine Hambach nearby Cologne in Germany. Many German and European activists came to Hambach forest to resist RWE’s mining intentions. Some of them were from Olomouc, from freewheeling ecological group called Family. When they came back from Germany, the Family decided to reveal the Inconvenient truth about RWE to festival visitors (Inconvenient truth is also a name of a documentary film projected by AFO). During three of festival days, Family handed out 200 leaflets called „FUCK RWE“ informing about RWE crimes in Hambach and greenwashing. Activists also presented the problem to festival visitors and discussed with them. One of the activists put stickers in university buildings where AFO takes place, the stickers were showing RWE mining activities. Two other activists tried to put posters with photographies of land destroyed by mining and energy of RWE directly in festival centre in building of University Palacky. Organizators of AFO banished the activists out of the university building (without University permission). But after an altercation the activists decided to left without compulsion and moved in front of cinema where other festival projections took place. There a director of AFO came to discuss with the activists and tell them that AFO wouldn’t exist without financial support of RWE.

The Family did not want to fight AFO itself, they want to confront advertisement of RWE which visually poluted many places in Olomouc. And if AFO doesen’t find another sponsor, the AFO’s organisers can look forward to new actions against greenwashing. One of the ways can be a street theatre which did not come right at all this year.