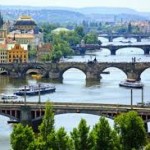 An article from Do or Die Issue 9. In the paper edition, this article appears on page(s) 12-14.

Given that there were going to be thousands of people in large groups taking different routes at the same time to the same destination, co-ordination of information for the day was going to be vital. For this there was a well thought out and well enacted system of communications, both physical and electronic.

Cycle couriers with mobile phones and/or two-way radios ran messages and ferried equipment, and there were several cycle medics too. Cycles are ideal for their speed and unfollowability. They go down alleys and cut through traffic, avoiding cops in vehicles and too fast for cops on foot.

For electronic co-ordination of information there were CB radios and a pirate radio FM broadcast (that never actually got working). The main co-ordination was done by a central place called Centrum. People were on the streets in affinity groups, and between a cluster of several affinity groups there would be someone with the role of communicating with Centrum. When any development took place or they needed information on what was happening elsewhere, they’d call Centrum. Because these calls flowed thick and fast, the people in Centrum could get a clear picture of what was happening at the various parts of the marches, and Centrum could call communicators with any information they needed. There was a mobile back-up version of Centrum in a vehicle, known as Traveller, which was ready to take over if Centrum was raided by police.

Centrum’s location was mere detail, and so need not be disclosed – or even decided – until the last minute. Late at night on the 25th, a local person booked into a hotel room under a false name and paid for it in cash. Two of the team stayed the night, the rest arrived early in the morning of the 26th. During the two hours that the march was assembling, Centrum phoned all the communicators and gave them the numbers at Centrum. These were Czech mobile numbers, got by changing foreign mobiles using Czech SIM cards, so the phones were untraceable to anyone.

The whole thing was resting on faith that the mobile phone networks would be functioning. As we were in a capital city, we felt it unlikely that the authorities would jam all the networks. In the end, we were right. As back up, there were digital two-way radios with an urban range of around 1km, and longer range CBs. They were, however, very few and badly distributed, so it’s fortunate that they weren’t needed. All the communicators’ numbers were on a computer that could send a text message simultaneously to every number.

Centrum contained eight people and the same number of phones. Four of these were numbers given out, three were retained for outgoing calls (mostly to communicators, Traveller and the pirate FM crew) and one for medical communication. Because we’d be talking to people in very loud places (samba, riot or both), there was an effort to have people who could speak with communicators in their native language. In Centrum were native speakers of English, Czech and Spanish. German would’ve been good too, but nobody came forward to do it. The team also contained someone with legal knowledge and a trained nurse.

There was a large-scale map of the city, and coloured pins to denote the different coloured marches and the police. There were several of the team who had a good knowledge of the city’s geography. This was crucial in order to be able to direct people to labyrinthine narrow streets for getaways, or else to know, for example, that what appears on the map as a road with open space at either side is in fact a bridge over a ravine.

Cycle couriers phoned in with details of police build-ups, people who were surplus to requirements at a barricade were given a police-free route around to join up with a group who were needing more people for a promising push at police lines, groups on either side of police blockades could co-ordinate their knowledge and efforts. Injured people taken to hospital by police could use Centrum to escape custody and get taken to a safe house for medical treatment.

Centrum’s mission was always clear; it was not a command post of generals, it was simply an information collection and distribution point. Centrum could not see what was happening, and decisions about what to do on the ground rested entirely with the people on the ground.

By 9.00pm after a 13 hour shift, the information was not coming in to Centrum in sufficient quantity or detail, and the need for co-ordination of different groups had abated. The incriminating bits of paper were ripped up and flushed down the toilet, and the team left the hotel. No police saw them, and they were now un-nickable.

It occurred to those involved that not only was it a good idea to have a roving back-up in a vehicle, but there could also have been a back-up far away, in a different town – or even a different country. As long as they had mobile phones, a map of the city and a first-hand knowledge of it on the ground, and people who spoke the same languages as the communicators, they could have been anywhere.